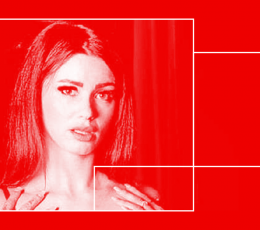 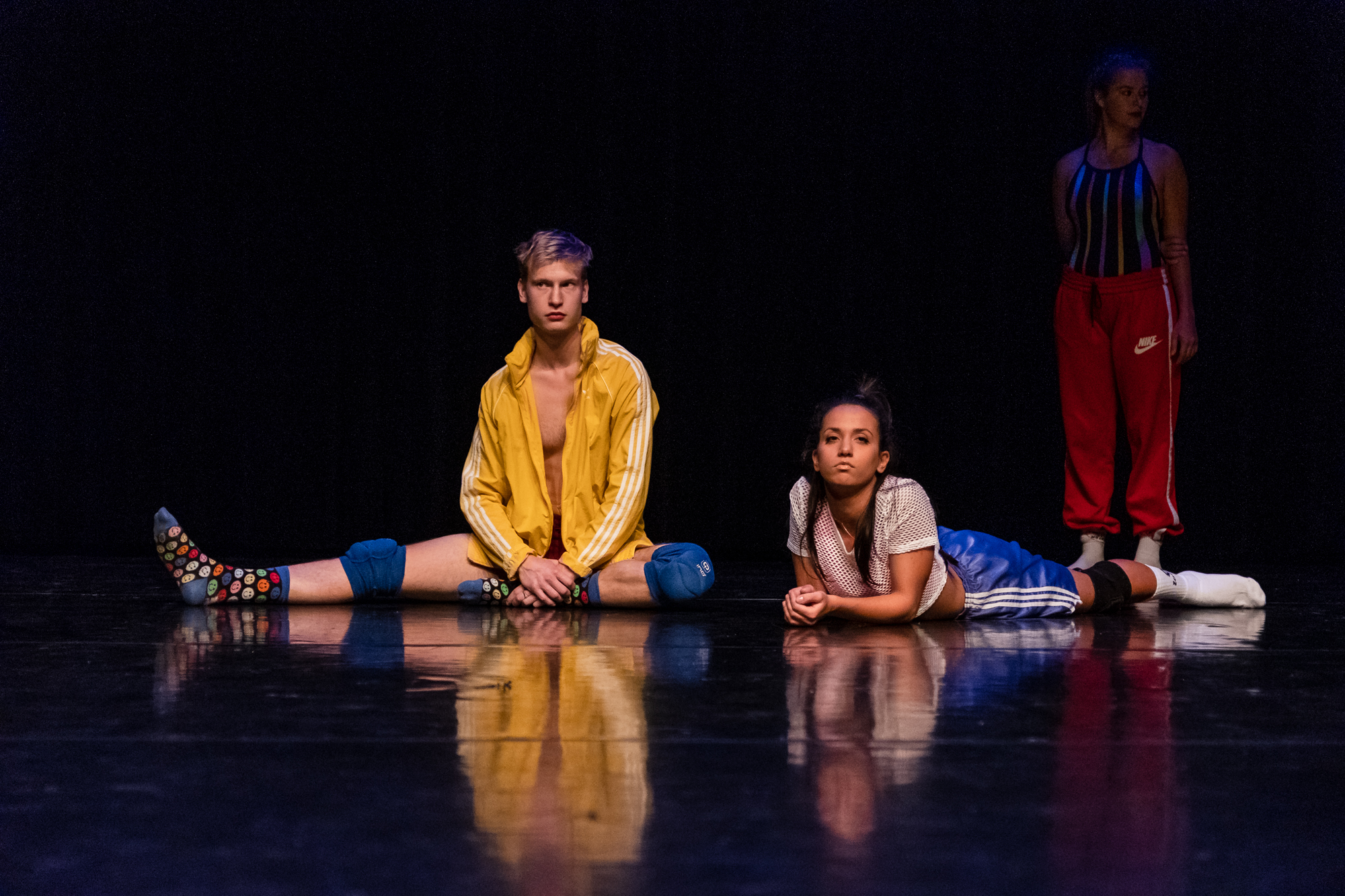 I was at the theatre and found myself in a modern-day paradise. The most beautiful trees in the world were not there, neither were the brightly coloured parrots sitting in those trees. No river graced by elegant swans and no schools of fish swimming in that river. No romping tigers and no curious horses. No sun and no blue skies.

I was in the theatre and the walls were bare and the floor was bare, except for the figures. The figures were distributed over that space, standing up or sitting down. They wore happy expressions; they seemed happy. They stared ahead contentedly. They wore sports clothes in a variety of colours.

I sat in the audience, watching the figures. Someone wore a swimsuit with track bottoms on top. I registered ‘woman’. Someone was wearing shorts and a shirt. I registered ‘man’. He had a long plait. I hesitated and then registered ‘woman’. I didn’t do this particularly consciously, but I was aware of the labels I was attaching to everybody. It made no sense and I was ashamed of what my mind had been registering. Could it be that the title Performing Gender had triggered this? Or maybe the title simply made me more aware. 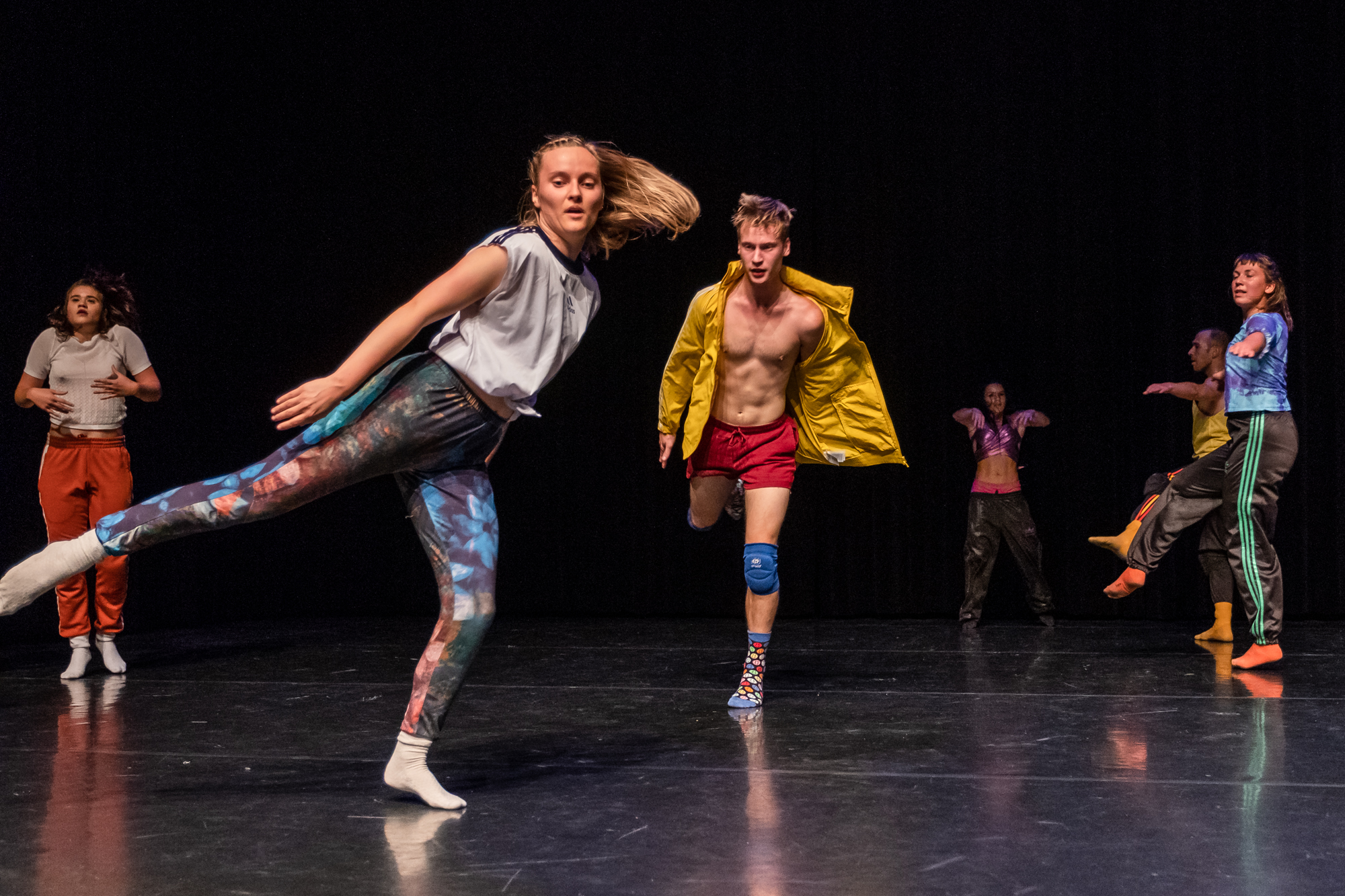 I was sitting in the audience, watching the figures on the floor turning on one leg, around the others and through the others. And although they were all rotating, no-one turned the same way. They were individuals from the same species: human beings. It reminded me of birds of paradise performing their mating ritual. Except that this was not just ‘the male’ performing for ‘the female’, but the reverse too, at the same time, for each other, through each other, from one to the other and all this simultaneously. Like a big dance of love for everybody, by everybody. Like a dance of love for human beings.

The dance made me feel nostalgic, made me long for a time or period that has never really existed. A time in which every human being is the same, regardless of ethnicity or gender.

I was at my first rave, long ago. Everyone was jumping and dancing energetically to the pounding of the bass, while a bright moon shone down on us. That night I became one with everyone there. That’s how it felt, as if I had become one with everyone there. As if we were all part of a bigger whole. Regardless of our backgrounds. We were human beings. With our hands up in the air and our bare feet stamping the ground we were celebrating life together. Until the sun came up and the moon slowly disappeared.

I was sitting in the theatre and saw figures raving on the floor. Together. With each other. United. As human beings. But they seemed to be transcending human existence. Energy bombs. Jumping to the pounding of the bass. Like an ode to life, to love and humanity. 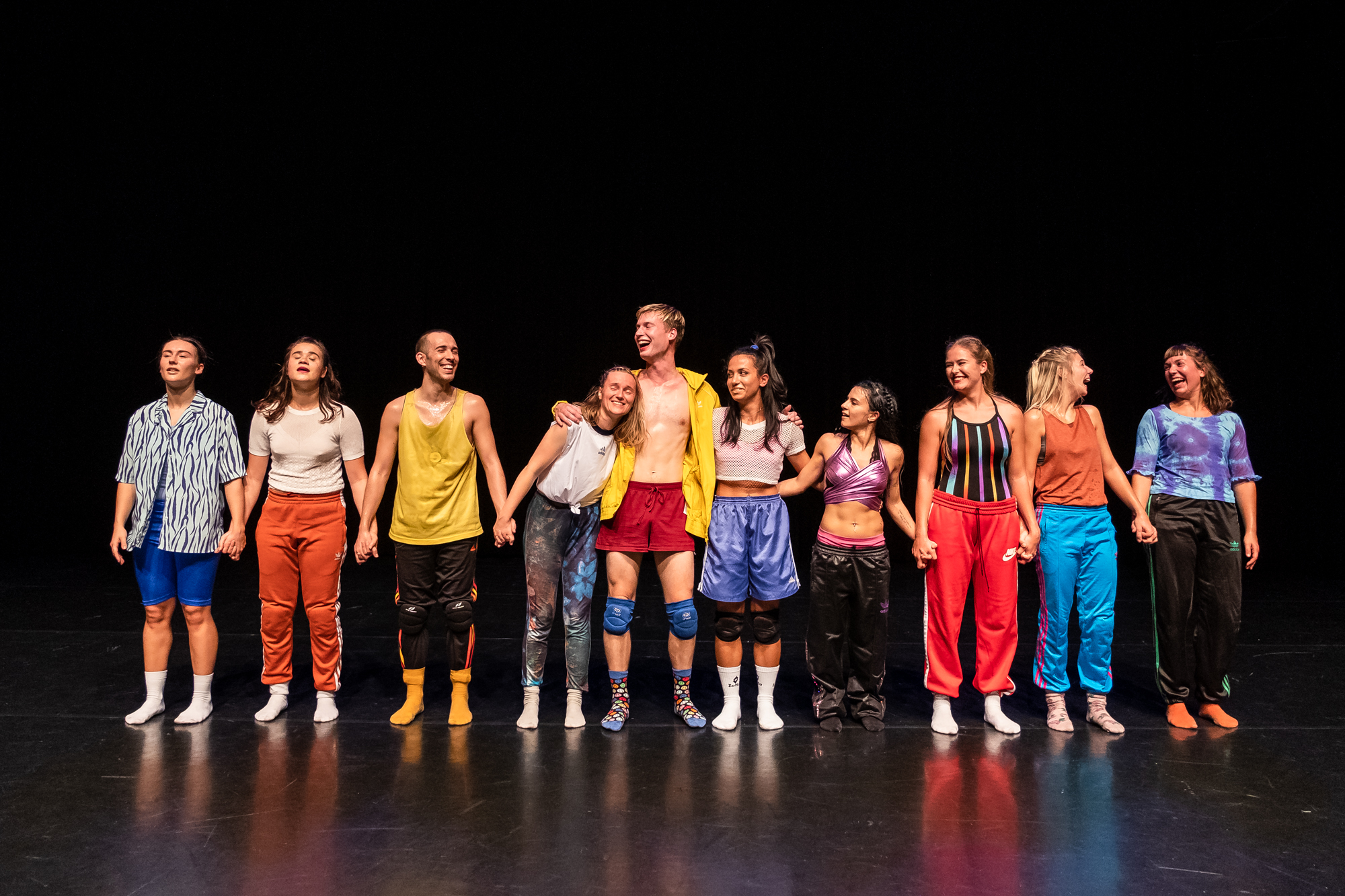 On Performing Gender
Performing Gender: Dance Makes Differences is a European project in which behavioural and identity aspects of gender and sexual preference are linked to the activist power of dance. The project raises gender awareness among dance makers, dancers, dramaturges and audiences in different countries and contexts.

In five weeks of training, five dramaturges and dance makers: Sophie Unwin (UK), Natasa Zivkovic (SI), Roberta Racis (IT), Koldo Arostegui Gonzalez (SP) and Jija Sohn (NL) expand their knowledge, expertise and tools. In five weeks of workshops, they share these with dancers and audiences. DansBrabant and Theaterfestival Boulevard are the Dutch partners involved in this project. See also performinggender.eu.